Not an expert in the DA guns, but this seems like an unusual item.........
Thoughts and comments team ROCS??
Cheers,
JAY

The early .357 and .41 Redhawks bring a premium and that's not a bad price for it. I had one like it in stainless among a group of 14 guns that got stolen from me and it's the one I miss the most.
Bennett
Any day without learning is a day of backing up.
Top

Bennett,
Ya,
I might should have made a bid....
BUT like you say "Any day without learning is a day of backing up"

Cheers,
JD
I do not "own" these guns, I am but the next caretaker
Top

Maybe so Jay, 90% of the Redhawks you see are chambered in .44 Mag. If it's meant to be one will find it's way into your hands and who knows one day maybe I'll replace mine.
Bennett
Any day without learning is a day of backing up.
Top

That's likely the least common Redhawk ever made.
Top

So.....
I really SHOULD HAVE BOUGHT IT

Cheers,
JAY
I do not "own" these guns, I am but the next caretaker
Top

There are some earlier Redhawks in .45 Colt as well.
Chet15
Top

As stated above, the EARLY (first ten years or so) production Redawks in 41RM and 357Magnum were made in lower numbers and were argueably lotsa steel for the cartridge. Not really rare just tougher to find when looking for one?

I had one of each and frankly I traded them off as I found no real advantage for them. The slight ($40-50) premium above a 44RM model was not noticed. Note that while I never felt undergunned with the 41 revolver across my lap in a treestand - I always thought of the 44's versatility, from 800 fps "Special" loads to 300 gr monster-ready rounds, should some wayward 30-foot Anaconda rise out of the swamps...

Only then did I fear the 41RM was somehow limiting for me.

The Redhawk was designed specifically around the 240 grain 44 Magnum, some say over-designed. It will take constant use of heavier bullets and charges. Romance of other brands aside, It remains King of its purpose. Buy one or get another.

It is a Right, NOT a permit.
PC = Political Submission

I have been looking for the .41mag Redhawks now for almost a year. The early Redhawks that I have seen for sale were all well used, and the prices were double what they sold for. Ruger hasn't made many in 41mag. Most of what I have seen lately are all Davidson's exclusives and carry about a $100.00 premium. In fact they just came out with 3 different barrel lengths in the .41mag. Redhawk and they have already sold out of the 4 1/2" model. These are all limited quantity guns and if you want one don't wait, they don't seen to last long.

I know the .41mag. has been sort after by hunters for years, but I believe there is quite a collector demand building. IMO

I'd like to have another 5.5 inch 41 Mag but you're right ..... the prices just keep going up and up! Not sure they're actually SELLING at some of the asking figures but ..... 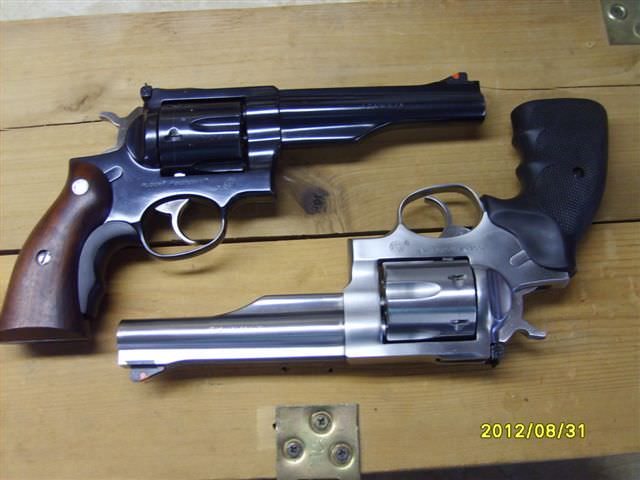